Property Taxes in the 19th Century

Get ready for a Pop Quiz.

All of this on the same day!

It never ceases to amaze me how much misinformation is out there and is passed on to the public by others who don't know how to research responsibly. This city kept detailed and scrupulous records and they are available in the easiest locations for all to see.  The tax records, for example, are in our Public Library and even the most casual perusal of them will reveal how property in  was taxed in the 19th century:

Property was taxed the same way it is today:
Taxes were based upon the assessed value of the property.

It’s as simple as that.  The only architectural tax ever levied on houses was after the fires of 1788 and 1794, which destroyed 856 buildings out of 1100. In order to keep fires at a minimum, the Spanish government taxed chimneys, hence many houses shared a chimney to keep the taxes down.  Beyond that, houses were never taxed on architecture, be it width, height, windows, doors, rooms, posts, poles or columns.  Let’s take a stroll through 1836, shall we?

In 1836 New Orleans was the Queen of the South.  She was the 3rd largest seaport in the world (New York, Liverpool, New Orleans), the wealthiest city in the United States and 1836 was the pinnacle of Creole wealth and prosperity.  It was also a time of political upheaval; due to the animosity between Creoles and Americans 1836 was the year that the city divided into separate municipalities with separate city councils presided over by one bilingual mayor. The property tax base in 1836 was 0.2%.  Ok, yeah – let me say that again: zero point two percent.  I can hear the weeping and wailing of the people of 21st Century  over that one.  0.2%.  Sheesh!  An 1836 dollar in 2016 is roughly $21.75.  That said, let’s have a look at the property taxes of some of our most notable citizens.  These records are for the first municipality - the French Quarter - only.  Before we begin, let's take a moment to understand them.

First you see the record number - No. 680.  Then you see the property owner's name, in this case Veuve (Widow) Fce (Francoise - or Frances, in English) Juncadella.  Below that you see 1st District (Municipality - French Quarter) followed by Islet 53; each city square (bounded by four streets) was called an "islet." The exact address of the property being taxed was not recorded, only the number of the square in which the property is located.  Next you see the value of the property followed by the tax paid – in this case you see it as:  $10000$        20  - the second dollar sign is actually for the $20.00 – that’s just the way they wrote it.  You’ll see that in most of these records.  Finally you see the word Paye or, more usually, Payé – this is French for “Paid.”  This particular record is for the building that is now The Old Absinthe House at Bourbon & Bienville St.  Ok, got it?  Let's get started and we'll begin with the Baroness Micaela Almonester de Pontalba:

In 1836 she owned all of the properties on either side of Jackson Square, but her famous buildings were not built until 1850.  Since she owned two entire city blocks, the entire blocks are assessed. Interesting that one block was assessed at $150,000 and the other at $160,000.  In 1850 her buildings cost her $150,000 and $140,000. Talk about increasing the value of a property!  Next, let's have a look at the publisher of the New Orleans Bee, Jerome Bayon. (Much of the Lalaurie story came from this newspaper's confusing, conflicting and not entirely accurate account.)

Please note he was also taxed for "2 esclaves" - slaves. Remembering that slaves were property, slave taxes in 1836 were $1.00 per slave.

Here is Nicolas Girod, the man who gave us Napoleon House:

The first entry is most likely the house at St. Louis and Chartres that we know and love for the Pimm's cup and toasted muffulettas.

Anyone recognize this name...?

This is our beloved Marie Laveau.  This would be her house on St. Ann St.  In today's money it would be valued at $62,250.00. Apparently, not all slaves were taxed; although Marie Laveau was a slave owner she did not own any taxable slave property in 1836. Also note the letters fcl - femme de couleur libre - Free Woman of Color. This next one is for J. B. Leprêtre - he eventually purchased and resided in the house that is now (erroneously) identified as "The Sultan's House" at the corner of Dauphine and Orleans.  This particular record is for the building on St. Louis St. which now houses Antoine's Hermes Bar. (There is an interesting entry that says: "$2500 deducted and paid to the account of Mme. Prospere Marigny" and $5.00 tax was deducted.  Although it would require some digging to find out what that as about, it's interesting to note the Prospere Marigny was the son of that rascally Bernard deMarigny.)

Ok, time to have a look at Prospere's cher papa, Bernard deMarigny.

He owned beaucoup property in the French Quarter as well as in the outlying areas; these are the records on just three of his many, many properties.  Please note that in 1836 he was far from poor. In 2016 dollars these three properties alone would be valued at approximately $2,131,500.00. Marigny was also a large slave owner but none of his slaves are recorded on this record.  Despite the stories and the legends, Marigny was never destitute - the family has his records and they reveal a very different picture of his financial life.

Here we have John McDonough, (above) funder of our public school system. The fourth notation down has the note "nord ouest" - northwest - meaning a property on a corner.  Like Marigny, McDonough owned many slaves but none of them are recorded on this record.

Below is a very interesting one.  Nancy O'Hara.

She is remarkable in that she is, not only an Irish woman, but an extremely wealthy one. The three properties listed are for two at Dauphine and Barracks St. and one at 622 St. Peter St. (now M. S. Rau Antiques - at which, by the way, she ran a snuff factory!)  Please note that she was also taxed for 12 slaves. This is the largest record of taxable slave holding we have seen so far.

Our city's Mayor was not above taxation: 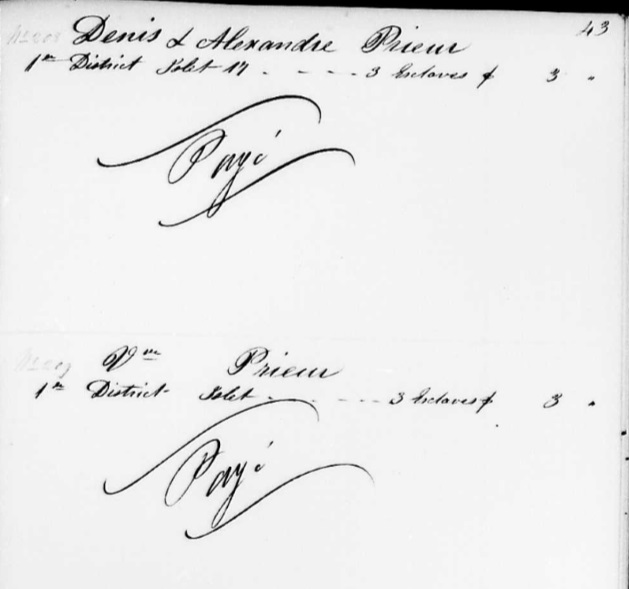 Denis Prieur, mayor of New Orleans for several terms, probably made a bigger impact on our city than any other 19th century mayor.  This is a record for slave taxes for both he and his brother (together on one record) and his widowed mother.

Two years after this was recorded Toby sold all of his city properties and moved out to the country. His house was on the Livaudais plantation; S. J. Peters subdivided the plantation into a city named Lafayette which, in turn, was swallowed up by the city of New Orleans and became our Garden District.  In the 1850's Toby went belly up and lost his Lafayette house at sheriff's auction.  That house, the oldest in the Garden District, still stands and is known as "Toby's Corner."  The gentleman in the next record is a stop on my St. Louis Cemetery #1 tour:

Seaman Field, a native of Westchester County, New York, came to New Orleans where he became a prosperous merchant and slave owner.  In this record we see that he was taxed for 6 slaves.  On his tomb is engraved -

I point out that Cinthy, with no last name, was a slave.  One wonders if Cinthy was one of the slaves in the tax record or if she was purchased at a later date. One is also left to question if Cinthy was either a.) in the family for a very long time or b.) had a "special" relationship with Seaman Field....if you know what I mean...and I think you do.....!

Finally, a record that many will find both enlightening and disturbing.  These are records for two Free People of Color. 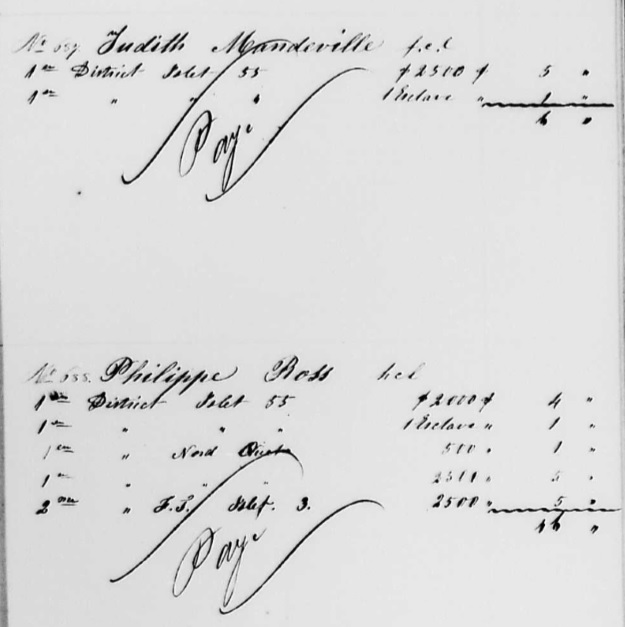 The first is a record for Judith Mandeville, fcl (femme couleur libre - free woman of color) and the second is for Philippe Ross, hcl (homme couleur libre - free man of color).  M'sieur Ross, particularly, shows that many Free Africans were often people of considerable means - his property would be valued at $163,125.00 modern dollars.  M'me Mandeville, however, not so affluent; her propery clocks in at $54,375 in today's money.  Where these records often perplex (and frequently offend) people of today is that they reveal the cold, hard fact that Free Africans were slave owners, just like their white contemporaries.  Pointing this out does not justify or make anything right - it simply expands the story and makes it bigger.

History is complex and often discouraging.

These tax records are fascinating on many levels.  For one thing, they put to bed any erroneous notion that taxes were assessed by any means other than economic assessment. But also they are a glimpse into the personal lives of the people we often romanticize. We talk about Bernard Marigny and his exploits, Nicolas Girod offering asylum to Napoleon Bonaparte at his house, The Baroness Pontalba returning to New Orleans amidst cheers and fanfare to build two of our most famous structures.  But here they are human beings; here they have real lives.  Here we see the Voodoo Queen, Marie Laveau, going down to City Hall to pay her taxes!  We see our Mayor, his mother and hundreds of others accounting for their slave property and we see the enormous wealth of some of our most famous citizens.  Here, in the records of their day-to-day existence, they are people - just like us - who had bills to pay, property to manage, business to conduct, season tickets to the Opera...

...and, of course, taxes.  I wonder what they would say if they could see their city today.