A question I am asked from time to time is "How long did it take to travel by steamboat?" Well, let's look at a random steam packet - we'll choose the Ohio Belle under the command of Captain John Sebastian.

On the 1860 trip to  she was fully freighted, carrying "moderate passengers."

Check out the freight that arrived in . 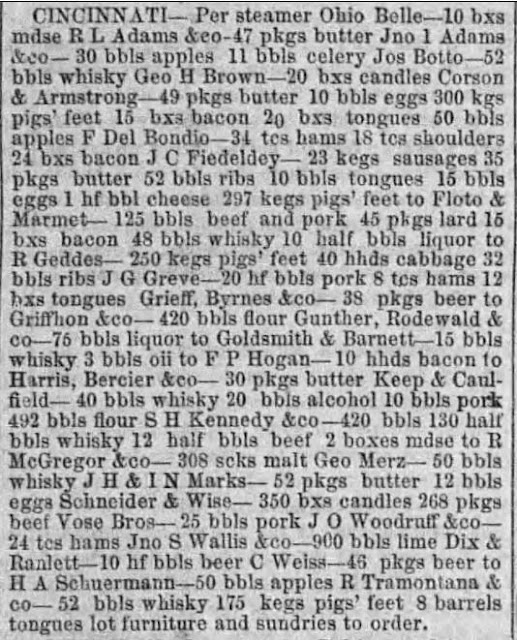 In 1875 the Susie Silver, under the command of David H. Silver (do you think he named it after his wife or daughter?) left  for  on September 1...

Interesting little side note on the Susie Silver – just below Memphis was a treacherous little bar called Reeve’s Bar where the water was normally only about 4 ½ feet deep.  On this particular trip down, the Susie Silver lost her fuel barge.  Her fuel, of course, would have been wood or coal, not petroleum.  It did not, however, delay her progress.  Not sure how that happened.  According to the media – which, obviously, is not always trustworthy, the hull of the barge was formerly of a steamboat called The Armada which was said to be the first steamboat Abraham Lincoln ever traveled on.  Maybe, maybe not...

It’s fascinating that the newspapers of the day published the arrivals and departures of steamboats from city to city.  Today we can go online and track our FedEX shipping but back then this was the way it was done.  Imagine, you have family arriving from  and every day you run to the newspaper to see where the Ohio Belle is.  Or you have a shipment arriving from  only to find out that the fuel supply sunk on a bar – then find it made it safely to on schedule!  Amazing stuff, this.  (Of course, it also increases newspaper circulation!  ‘Nuff said.)

So many people want to think of steamboating as river pirates coming aboard to rape and loot and pillage or gamblers losing entire plantations in a poker game and challenging each other to duels.  Well, far be it from me to say stuff like this never happened but the day to day truth about steamboats was a little more mundane.  It was shipping, it was travel, it was (yes!) showboats – but generally speaking, it was watching the newspapers to track your shipment of pigs’ feet.  However, March 15, 1856 the Ohio Belle did have an amazing incident that made all the papers and is a prime example of media slant.  According to Capt. Sebastian’s statement, the Ohio Belle had just shoved out of Smithland Kentucky (which is located where the Cumberland River meets the Ohio River) when a man on the shore flagged her down.  She landed again and took him on as a passenger.  (Interesting that you could flag a steam boat down from the shore and board it.)  The man identified his name as Jones.  That afternoon he went to the ship’s barber (barber services aboard a steamboat - never thought about that but, of course!) and paid for services with a ten dollar bank note from a bank in .  The barber then took the bill to the ship’s clerk, whose name was Stephens. He deemed it to be counterfeit and, long story short, a fight between Jones and Stephens broke out during which Jones whipped out a pistol and fired at Stephens, fatally wounding him.  He didn’t live ten minutes.

After firing the pistol, Jones tried to run and escape but was apprehended by the crew.  At first, Captain Sebastian was afraid that some of the passengers may try to lynch Mr. Jones but Sebastian assured them that Jones would be handed over to authorities.  Jones was taken to the engine room and tied, bodily, to a staunchion as the Ohio Belle steamed ahead.  She reached  where Captain Sebastian ordered a coffin for Stephens.  No family for Stephens is mentioned but friends will be receiving the coffin and arranging burial.  Sebastian notified the authorities.  , however, had no jurisdiction over the incident, having occurred elsewhere, so it was decided to head on down to  and have him arrested there.  Mrs. Sebastian (the captain’s wife) was onboard and came to tell the Captain that Jones had begun to slump and the rope had slipped around his neck, putting him in danger of being strangled.  They went down, untied him from the staunchion, wrapped the rope around his hands and body and sat him in a chair, however not secured to the chair.  Nor, may I add, was anyone left to stand by and guard him.  At about  they went to check on him, finding the chair empty, the cut ropes laying on the floor and Jones gone.

Although in his statement Sebastian makes no mention of what happened to Jones, newspapers tell a vivid tale of pure fiction.  They have Jones as the victim, his money was not counterfeit, he was lynched and thrown overboard, still tied to the chair, by the Captain and his angry mob.  In this drama, Captain Sebastian, standing like Basil Rathbone on the prow of the ship, shouts to people on the river banks “If you find a damned scoundrel floating by on a chair, take him out and hang him!”  (Although in some accounts there is the sound of a loud splash and the ropes are found on the floor but Jones and the chair have vanished.)  In his statement, Sebastian says the witnesses will attest to Jones not being secured to the chair and no word exchanged between Sebastian and anyone onshore.  The newspapers also say there was a man from California onboard who boasted that he’d hung over fifty men for as little as five dollars and he’d happily “dispose of this damned scoundrel for a damned sight less!”  Sebastian answers that the only passenger onboard who’d even been to  was a doctor from  who was confined to his bed due to an injury – to which witnesses will attest.

Well, come to find out, Jones’ name was not Jones at all.  (Is anyone surprised?)  His name was Joseph Cooke, Jr. and he was a fugitive from the law, having also killed a man in .  On March 18th it was reported that Jones-Cooke had jumped overboard to escape and drowned in the river.  AND YET – the media still makes him out as a victim and lays all the pity on Joseph Cooke, Sr. having to put his “ill-fated son” to rest.  The fact that Captain Sebastian had to order a coffin for Stephens and arrange to have his body shipped home for burial apparently means nothing.  There is no report on whether or not the ten dollar bill was or was not actually counterfeit. 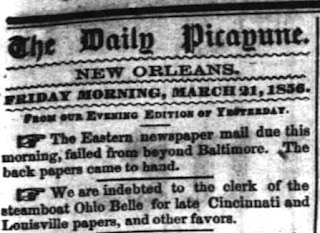 So, of course, there are these stories and this is the stuff of showboat melodramas!  This is exactly how history becomes distorted and stories are told that have no bearing on reality.  All that's missing is for Captain John Sebastian (with a parrot and a peg leg) making poor ill-fated Mr. Jones walk the plank at Cave-In-Rock, followed by absinthe for the crew of the feared and notorious Ohio Belle as she heads down to wicked New Orleans to deliver her freight of cabbages, ham, butter and beef tongue before murdering a few pimps in a riverfront gin mill and then heading back up to Cincinnati.  In reality, this affair happened on March 15, 1856 and six days later, on March 21st, the New Orleans Picayune thanked the clerk of the Ohio Belle for delivering the latest newspapers from Cincinnati and Louisville (and other favors) and announced the Ohio Belle's departure for the return trip to Cincinnati on Saturday, March 22nd at 5:00 pm.

Heroes and villains notwithstanding, the Ohio Belle toted that barge, lifted that bail and kept on rolling along.
Posted by Tour Creole at 7:29 AM